ON THE LUCKNOW BENCH VERDICT IN BABRI MASJID/RAMJANMABHOOMI TEMPLE DISPUTE 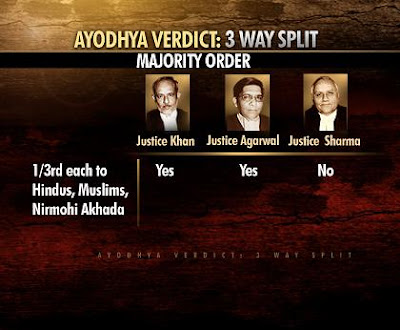 Friends,
The Lucknow Bench of the Allahabad High Court pronounced its verdict in title deeds suits and related issues on the Babri Masjid/Ramjanmabhoomi temple dispute yesterday. The verdict calls for a three part division of the 2.77 acre land between the plaintiffs representing Lord Ram, Nirmohi Akhara and the Waqf Board. Another salient feature of the verdict is that it has accepted the claim that the place under the central dome of the demolished three dome structure was the birthplace of Lord Rama “as per faith and beliefs of the Hindus”. The verdict needs to be studied in detail and the legal issues can only be resolved now in the Supreme Court, as per the Indian Constitution. However, preliminary observations on the verdict suggest that it has accorded priority to religious sentiments and faith over legal entitlements and historical evidence.
The observation made by two of the three judges that a temple was demolished to construct the Babri Masjid does not have any historical basis. There are several questions on the credibility of the Archeological Survey of India (ASI) Report which was submitted to the Court after an excavation of the site was ordered. This report was prepared in 2003, when the BJP led government was in power and many renowned historians had questioned the validity of the same. Moreover, the ASI did not offer any opinion on whether the architects of the mosque were responsible for demolition of the temple. Can theological beliefs, rather than historical evidence, be made the basis of jurisprudence under a secular, democratic state?
The verdict also appears one-sided because it takes away the legal claims of the Muslims over the site – given the indisputable fact that the Babri Masjid existed there till its demolition in 1992 – and converts the sentimental rights claimed by some groups from the majority community into legal rights.
The essence of secularism and democracy lie in equal respect for all religions and separation of politics from religion. These foundations of the Indian state and polity were weakened with the demolition of the Babri Masjid in 1992. Indian society has to move ahead; but not by shoving the ugliness of this past under the rug. Indian society can move ahead only by reinforcing the principles of secularism and democracy and decisively rejecting majoritarianism. Else, those who conspired and carried out the demolition of the Babri Masjid will be inspired into similar misadventures in other places, thus perpetuating communal and majoritarian politics at unacceptable cost to human lives and India’s social fabric.
SFI hopes that the Supreme Court will take into cognizance the import of this verdict and amend it suitably to secure and strengthen India’s secular and democratic traditions. SFI appeals to the student community not to fall prey to any kind of provocations which are aimed at creating disharmony and breach of peace in the current scenario.
Sd/- Sd/-
Lenin President, SFI-JNU
P K Anand, Secretary SFI-JNU
Courtesy: www.pragoti.org
Posted by MAOIST TERROR IN LALGARH at 6:40 AM